The tenure of its employees can say a lot about a business. For example, high turnover suggests poor culture or an environment that’s too demanding of its employees. Conversely, longstanding tenure and high retention rates signal that employees are happy, valued and content in their positions.

Tenure varies by position and, as a general rule of thumb, the higher you climb in a company, the longer the tenure of that position. An entry-level sales position might have an average tenure of one year, while the director of sales might be a position someone holds for an average of four years. It makes sense. Think about if those times were reversed! If your leadership has a shorter tenure than lower-level positions, you’ve got a real problem.

It brings about the question: how long is the average tenure for a member of the c-suite? It’s a fair question and one companies need to ask themselves as they begin the search to fill a vacant executive position. It sets the expectation for how long you can and should expect senior leadership to stick around.

Below are some important statistics, courtesy of a 2020 report by Korn Ferry on the average tenure of c-suite leadership across different positions and industries, from 1000 companies.

The average tenure of an executive is 4.9 years

For companies filling a vacant seat at their executive table, expect the ideal candidate to stick around for about five years. While this might sound short, there are several factors behind this figure and context for that length.

First, this is the aggregate average of all C-suite positions. Top company figureheads have tenures that skew higher—for example, 6.9 years for the CEO. Shorter executive tenures typically fall to positions in evolving fields. For example, the average tenure of a CMO is just 3.5 years, while CHRO positions last 3.7 years.

Second, there’s also a broad industry component to consider. C-suite members in the financial sector have a higher aggregate tenure across all positions (5.25 years) than those in the healthcare field (4.36 years). The nature of the business and the greater industry could impact the length of an executive’s stay.

Finally, the age of executives factors into their tenure. Younger executives tend to hold positions for a shorter period of time—whether they’re poached by other companies or choose to pursue new opportunities earlier. Older individuals tend to retain their C-suite position longer. 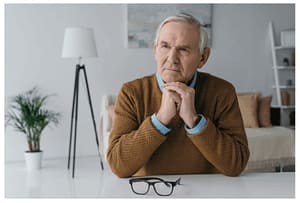 The average age for a C-suite member is 56

Speaking of age, executives tend to be individuals with decades of industry experience behind them. Despite the Mark Zuckerbergs (36) and Evan Spiegels (30) of the world, most executives put in 25-35 years of middle-to-senior-level management before they make it to the executive table.

Again, the specific position matters when it comes to age. CEOs are often the oldest people at the table because they have the most years of experience. The average age of a CEO is 59 years old. CMOs trend younger (54), alongside CFOs (54), with CTOs/CIOs (55) and CHROs (55) making up the middle ground. Again, age correlates to tenure—younger C-suite positions have a shorter average tenure than older ones.

Looking at age through an industry lens yields even more insight into the nature of C-suite employment. Again, financial executives trend older in aggregate (55.6 years old), with other sectors like consumer (54.6 years old) and tech (54.8 years old) skewing younger, largely based on the nature of the sector.

The Korn Ferry survey containing this data comes from January 2020. Needless today, the world has changed significantly since then under the uncertainty of the coronavirus pandemic. Leadership positions have become even more valuable during this period of disruption, which could serve to skew these same numbers for years to come.

Interestingly enough, executive tenure in 2020 was actually down from years past. Korn Ferry conducted this same survey in 2016 with some different results:

There are several contributing factors to the above changes and changes we can expect to see in the years post-pandemic. For example, in 2019-2020, the United States economy saw a period of “unicorn IPOs” as companies like Uber, Lyft, Peloton, Beyond Meat, Zoom and Spotify went public and drew in tenured leadership teams. This isn’t likely to occur in 2022, which means we can expect to see average tenure across the C-suite increase as top talent stays put.

Also driving executive trends in 2022 and beyond is the prospect of a shifting workforce, due to the pandemic. Remote work is on the rise, which has forced companies to pivot everything from operational strategy to growth planning. Leadership is vital in navigating these challenges. Smart companies will work hard to retain leadership through the turbulence, which will drive up the average tenure of executive leaders.

Now’s the time to attract and retain leadership

Organizational success doesn’t just step from having top-level leadership—it depends on retaining it. As companies gear up for a new future post-pandemic, it’s worth understanding the expectations for how long your leaders will stick around. This sets the expectation for how to find and place them, and what’s necessary to retain them.

Whether you promote from within, poach from a competitor or use an executive placement firm, it’s vital to find, vet, install and enable top-level leadership. Based on industry figures, these individuals need to accomplish a lot in a short amount of time before they’re on to the next board room. Getting them to stay longer and become a fixture in your highest-level leadership positions means making a good hire and creating an environment where they can reach their highest potential.

What types of executive hires are there?

Not every executive hire is a long-term one. Companies are increasingly hiring fractional and interim executives to fill gaps in their leadership or to benefit from specialized experience in a specific capacity. Some short-term options for executive hires include:

Which executive position makes the most?

There’s often a direct correlation between the hierarchy of the C-suite and executive pay. With that in mind, the CEO typically makes the most, followed by the COO. Following, in order of average compensation amount, is the CFO, CHRO, CMO, CIO, CTO and so on. Often, the CEO, COO and CFO will command top-tier salaries and benefits, since these are the most difficult positions to retain and the most important to the company. Salaries for CXOs can also vary greatly depending on the capacity they’re hired in (full-time, fractional, interim, etc.).

What is the average age of corporate executives?

According to factual data, the average age for a C-suite member is 56. This is a ballpark standard across industries, and can fluctuate up or down depending on the nature of the company. For example, tech companies tend to have younger leadership, while manufacturing companies tend to skew older. Most executives put in 25-35 years of middle-to-senior-level management before they acquire an executive title.

What is the average tenure for a CXO?

The average tenure of an executive is 4.9 years. Although, this can vary across different industries and across the different executive positions. For instance, CEOs tend to have the longest tenures at 6.9 years, while CMOs average just over three years in their respective positions. When it comes to industry, banking CXOs enjoy the longest tenure, while healthcare and technology CXOs tend to jump positions quicker.

Are company executives getting younger?

There’s an argument for recognizing younger executives. However, it’s one that’s skewed by the rise of the tech sector and the recent rash of IPOs and SPACs in public markets. Startup companies have younger leadership and, since most new public companies trend toward the tech sector, the average CXO position is also younger. In this sense, executives are getting younger. That said, the average age remains higher in more traditional sectors like banking, industrials, telecommunications and energy companies.